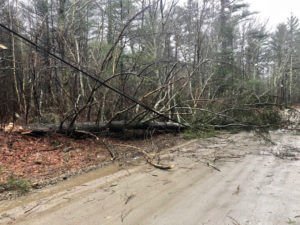 Ah, spring! We New Englanders have made it through another winter. As the temperature rises, snowstorms turn into rainstorms. In this transitional time, however, the ground has not yet thawed, and as those rainstorms persist, all that water needs to go somewhere.

Due to the laws of gravity, water will go from high ground to low ground. The result: basements become flooded with inches, sometimes feet, of water.

A flooded basement can cost homeowners hundreds to thousands of dollars, even with homeowners’ insurance. Appliances, carpeting, stored valuables can all become ruined. Furthermore, if flood clean up is not conducted correctly, mold can present a health issue,

According to NOAA, the cost of flood damage in the US last year was over $3 billion!

So how do homeowners avoid flooded basements in this rainy season? The best solution is the sump pump which is a small water pump that is placed in the lowest part of a house, typically, the basement or crawlspace. When a basement starts to fill with water, the sump pump will remove unwanted water from the building. These little gems can cost between $1,000-$1500 to install which is a small price to pay in comparison to the damage caused by a flooded basement, or home.

While sump pumps are a great solution, they are not so great when the electricity supply stops because they will stop pumping water.

When a storm hits, the potential for power loss can be a significant issue for the home or business owner.

If your neighborhood is prone to losing power, you may want to make sure that your sump pump has a backup battery. This will buy you a few more hours of pumping time after the electricity goes out, which can make a significant difference between being flooded or not.

However, if you’re on a municipal water system,  you may want to consider a water-powered backup pump.  This may be a better option as a well pump won’t work if the power’s out. The price you’ll pay for water consumption during a power outage is a minimal compared with the cost of a flooded basement.   Additionally, a water-powered pump never needs new batteries.

When New England gets hit with a storm, we usually get hit pretty hard, it is not unusual to lose power for several days which would exceed the life of a backup battery rendering the sump pump useless, and that is when the damage, and costs, start piling up.

Some homeowners take it to the next level and install a whole house generator which turns on automatically in the event of power failure. These generators are wired to the sump pump, and other needed appliances, to ensure that the home does not flood during a storm.

By taking a few precautionary steps, you can protect your home from flood damage and yourself from the headaches of dealing with flooding. Take our advice, plan for the worst and prepare your sump pump for an extended power outage!